Klosterviken is my home in the summers. I spend as much time I can there. It was there everything started for me, nearly 10 years ago (when I was about 10).

It is a really beautiful place (rock), with cliffs ranging in heights from 0.5m all the way up to 16m (all heights have been measured and are typed out on the cliffs.)

It is not illegal at all to be there. It is VERY easy to access via sea, via land is also quite easy, but boat is the best.

The cliffs are very steep in most cases, and the depth ranges from 5-6m to 10-12m, so there is plenty of water to go into.

Directions: To get to Klosterviken (Monastery-bay, sort of, just a quick translation from Swedish to English) from Mariehamn (the capital of Aaland). You can fly to Aaland, but it is the worlds most expensive flights looking at the distance you fly, so I wouldn’t recommend it!

So, rather go by ferry from either Sweden or Finland

After just 100m or so, there is a parkingspace on your right. Now, get out of the car and follow the path through the woods, and then you’re there!

Via sea: go south east from the Eastern Harbour of Mariehamn, drive about 3.5km straight south-east and you’re there! You can’t miss it, big rocks coming up out of the water, beautiful.

Well, Since three years back, every spring I’ve pushed myself to go the for the “first jump of the year” earlier and earlier. Now, this spring I completely crushed my old record: I went the same day the ice broke! (Which you can see clearly on the pics) Now, it was only 2.5 degrees C in the water at that time, and was feeling a bit scared. I was thinking that something bad might happen. “You know, jumping from 10m into that cold water (without any protective gear) might really do something to you!” was all I could think. But, fortunately, nothing happened. It was a real rush, and I went back several times before the temperature reached 10 degrees C! 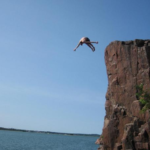