These directions are from the A55, wich runs along the north coast of wales from the Merseyside / Cheshire area. When you get near Llandudno look out for signs for the A470 South ( also saying ‘Betws-y-coed’ ) and take this road south for around 20 minutes.. You will (sooner or later) find yourself aproaching the A5 wich is the main road through Betws-y-coed. The junction is a strange ‘T’ junction ( you approach from the bottom of the T ) with the left fork of the ‘T’ veering on straight ahead. You’ll understand when you see it. Take a right turn over a bridge and past a 24hour garage, and within 2 minutes you’ll be in Betws-y-coed. Betws-y-coed is a fairly small town and the bridge is pretty much slap in the middle of it. As you drive through you will see a football field on your right and soon after, a small road leading off to the right which you can see crossing a gully-like thing with a river at the bottom. This is the bridge. Apparently its illegal to jump off this bridge but I don’t know exactly how illegal, I just found a site that says that according to a local bylaw, jumping from the bridge is not a good thing. But I think it is a good thing. And i don’t think anything worse than being told to stop would happen if the police caught you. Some people seem to like people jumping off it, some don’t. Just be warned. 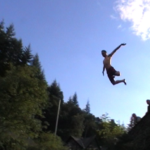