Probably one of the nicest places I’ve ever been to in many aspects. The place is divided in two by a “canal” that is about 15-20m across with a tiny sand beach furthest in the “canal”. On the left side of the “canal” (looking out to sea) is nice cliff which is about 10m at it’s highest. The further you go away from the canal, the lower the cliff gets, all the way down to about one metre. The water is plenty deep and crystal clear, about 8-10m. One exception though: Where the cliff is at it’s highest, there is sort of V-shaped cliff protruding underneath the water, about 1-2m down. The “inside” of the V is where you want to land, and the bottom part of the V is almost at the face of the cliff, so there are no problems of jumping into the deep portion, just look a little before you jump! 30-40m out from the cliff is a small island coming up out of the water, with cliffs ranging from about a metre up to perhaps 7-8m. Didn’t bother going there, but there were people jumping from there as well. On the right side of the canal is another cliff, which is a bit higher at perhaps 12-13m. Water is about 7-8m deep here as well, with some parts being a bit shallower at 5-6m. Look before you jump and it’s easy to spot the shallower parts (which are still deep enough). This cliff was much nicer in my opinion. The cliff had a slight inwards angle, which makes jumping a breeze. There is a cliff adjacent to the 12-13-one which is about 7-8m as well. With a flat top for many metres, it was the perfect place to do running gainers and such. Going even further to the left of the canal revealed more cliffs (the whole place is jumpable, but some spots are better for jumping) ranging from 8-14m (estimate), but I didn’t bother going there since I was alone and don’t like wandering off to jump alone. If you are going to Sarakinikos, bring a diving mask! The place is filled with caves and tunnels, and diving there was the best diving I’ve ever experienced. I won’t bother with descriptions, just grab a tourist map once you’re there and look for yourself. Enter the coordinates in Google Earth and you will see where it is. Accessible by bus, but most easily with scooter, car or boat. 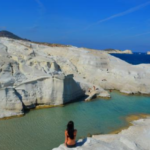